My Very First “Making Of…” Vignette… The Hitmen 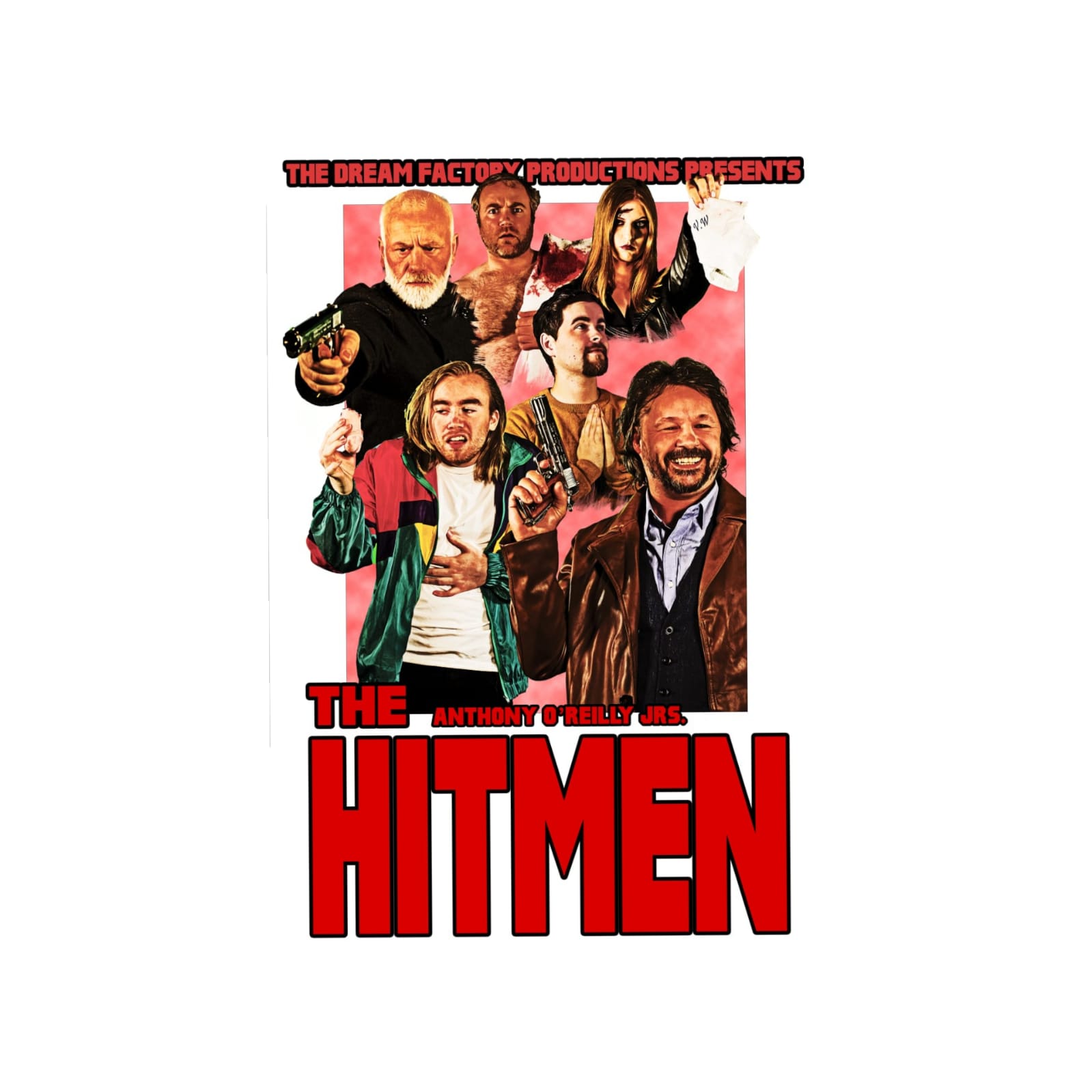 The Dreamfactory Productions has released a behind-the-scenes vignette titled “The Making of The Hitmen” on YouTube. Of course, you get to see me. I look like a serious chubby mountain of a man in this one!

We had a great time on-set, and in all the zoom rehearsals beforehand. The amount of rehearsal we did was easily more than any previous production I’ve worked on. We were well ready to shoot by the time we could finally all be in the same place at the same time. I met some interesting people. I think we’re going to appreciate all the work that went into this from all the cast & crew when the final product is released! I worked with The Dreamfactory Productions, the director: Anthony, the producer: Nicola et al.. on “This Christmas” previously. It was great to work with them again. This was my first time working on a subsequent project with a production house.

I look forward to the premiere of the finished product! I’ll be sure to post about it when it comes out. I think the plan is to submit to the film festival circuit, so the premiere might be well before it’s available online anywhere.

Movie Poster for “The Hitmen”

The first movie poster for “The Hitmen” from The Dreamfactory Productions has been released.

The behind-the-scenes documentation about the making of The Hitmen is coming soon!
For previous news from me on this film, see this post.

Shooting for my part on a short film titled “The Hitmen” with The Dreamfactory Productions wrapped last Saturday. They continue to film. I believe shooting continues for another two weeks.

I believe “The Hitmen” is going to be wonderful when it comes out, and of course I wish the team at The Dream Factory Production the best of luck with the production!

I had a great time working with the team, and the rest of the cast, and I’m looking forward to seeing the completed project! I have previously worked with The Dream Factory Productions on the short “This Christmas”

A short film titled “This Christmas” shot in mid-December 2019 has been released on YouTube.

Todd M. Hebert (You might know who this is if you’re here)

It’s a heart-wrenching little story shot in mid December of 2019, with a few to being released for the 2020 Christmas Season.

I enjoyed making this one. My character was a far cry from the evil one I played in the short film “The Cull” (which is linked to from my “Acting” page)

In typical fashion, my last name is again misspelled in the credits. Sometimes I wonder if I should just change my “stage name” to match the way everyone misspells it.

I enjoyed shooting this film. The entire shoot was very different than others I’ve done. We didn’t have any studio sets, it was on location.

A Contribution on HitRecord 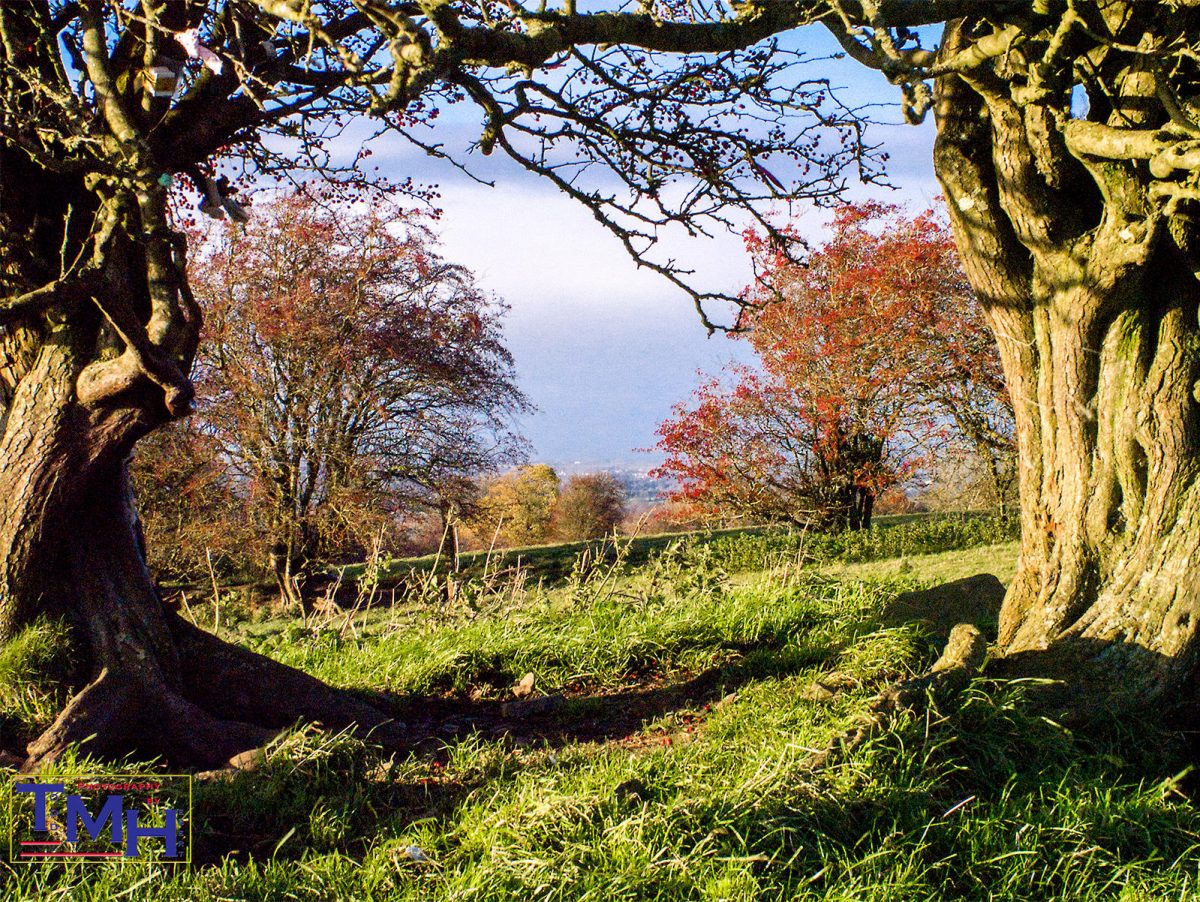 I’ve made a contribution to a project on HitRecord. It is not my first. This was reading a short piece about Ireland. Since I just got a new computer, and got my home studio kit set back up with it, it came at a good time to test the setup, and to do something creative in the middle of lockdown. Since the subject is Ireland, one that I love, I thought it only fitting that I should give it a bash. It’s the most creative thing that I’ve done since March, that wasn’t directly related to my “day job” in IT.

If you have a listen, you should be able to leave me comments on HitRecord if you’re a member. Alternately, contact me via the website here, or my Facebook page.

I star as Ebenezer Scrooge in A Christmas Carol 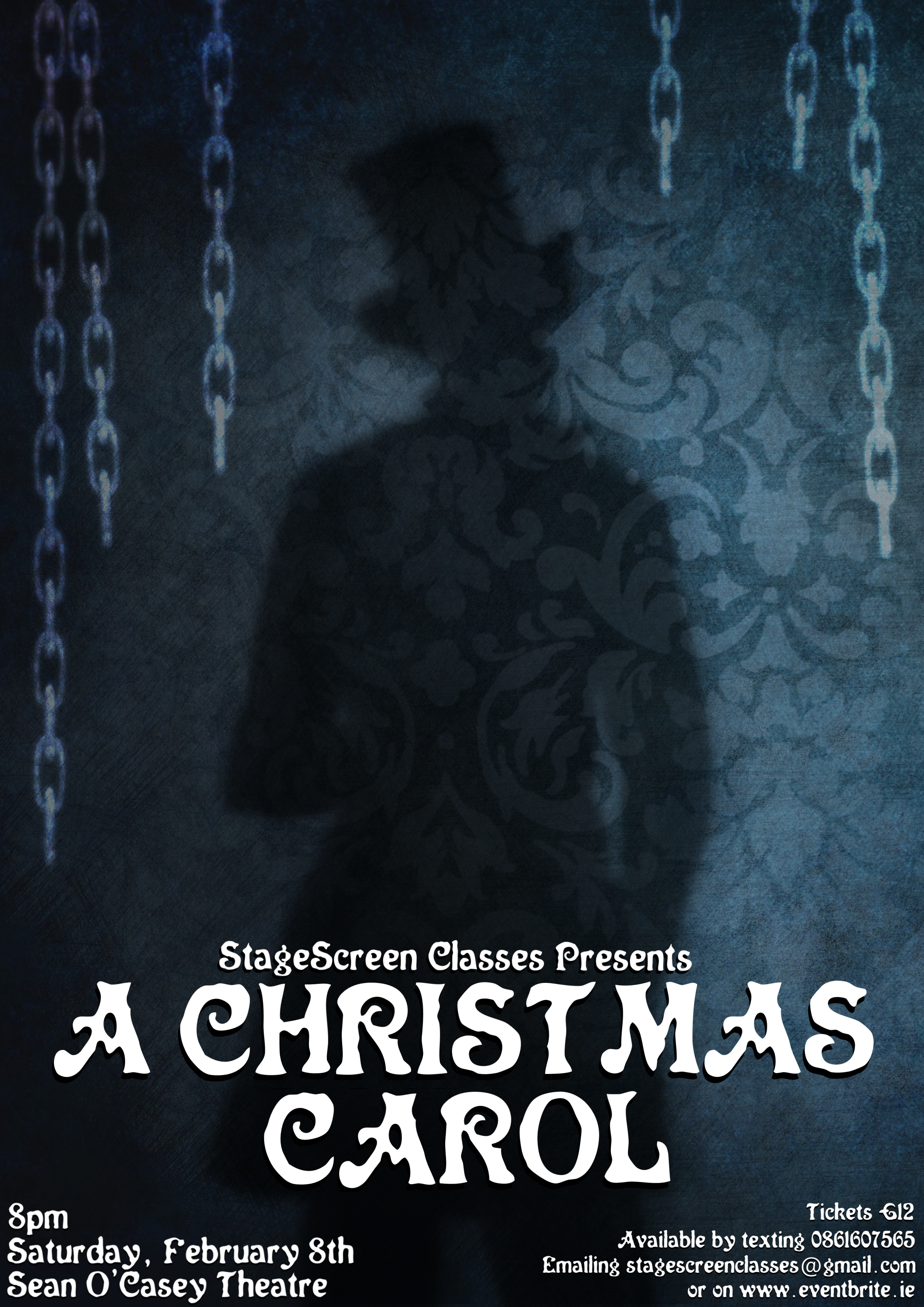 I will be playing Ebenezer Scrooge in a student production of A Christmas Carol, on the 8th of Februrary 2020 at 8pm.

This student production is for the diploma and performance courses that I’m taking with StageScreen Classes, led by Conor Armstrong Sanfey.

The best way to get tickets is to contact StageScreen Classes directly. Contact details are in the poster image.
The Sean O’Casey Theatre is at the Sean O’Casey Community Centre in East Wall, Dublin 3. It’s easy to get to via the LUAS, and likely by bus as well. The address is:
SEÁN O’CASEY COMMUNITY CENTRE, 18-26 St Mary’s Rd, NORTH, East Wall, Dublin, D03 AY74
Click here for a Google Maps link.

Come see the play, it should be great fun!

The director just notified me that I’ll be playing a role in a new short film. We will be shooting in mid-December. I cannot share details yet, but I’m excited about it. This is my first role since two surgeries after an injury in 2018. Merry Christmas to me!

Callback for an ad campaign

A casting director asked me in to audition for a part a few days ago. The part is for a beverage company’s ad campaign.

Shortly after coming in the door tonight, an e-mail arrived informing me that they want to see me back tomorrow evening.

I am the Official Production Stills photographer for the short film: Former Glory!

The production team for the short film Former Glory named me Official Production Stills Photographer, and I’m honored to have this opportunity

I’m looking forward to working with the cast and crew on this project. Two of the cast members are also friends of mine.

‘Former Glory’ is a gritty war short based on Irish war stories adapted for the screen. Set in the woodlands of Ireland, the film is based on true events. The story follows a unit of Irish soldiers in great difficulty; facing huge enemy numbers and falling short on soldiers and supplies. It is about hardship, war, and most of all, loss. 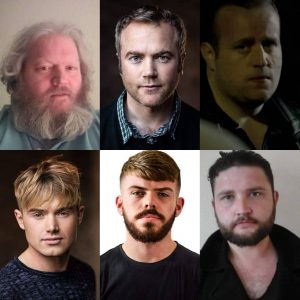 Adventures in Photography with Tim in 2006 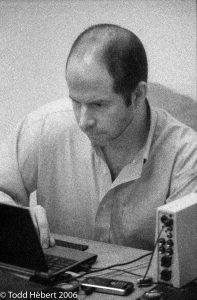 My Irish adventures began when I moved to Ireland in 2006. That autumn, one of my closest friends came to visit for a bit, and we went on a few photographic excursions.
I brought along my Fuji FinePix S7000, which was my first real digital camera.  Today it would be called a “bridge” camera, but when it was new there weren’t any real digital SLR’s out yet. There were some in development by the big names, but none had been released as of this point. I also brought along my 1965 Canon Pellix QL 35mm film camera, with a roll of Kodak TMax P3200 black and white film.  I shot a bit over 20 shots on the roll.  Because I didn’t finish the roll, I did not take it out of the camera.

Some time later I went to use the Canon, and opened the back to insert a roll of film without remembering that there was a roll still in it.  This caused some light-strike to the film, especially around the sprockets. The first 20 exposures or so came out alright when I got around to developing the film over eleven years later. The film was shot in November 2006, and developed in January 2018. The exposures were pretty well spot-on.
I had looked several times for places around Dublin to get B&W film developed commercially. The number kept dwindling and I never got around to developing it.  At this point there appear to be only two places in Dublin that take in B&W film for developing, and they both send it out. This prompted me to purchase a developing tank and other necessary gear, along with developer, fixer, and a rinsing agent. The P3200 was my first test with the new developing equipment, and it was definitely a success. I found a great place here in Ireland for photographic supplies called The Photo Shop. 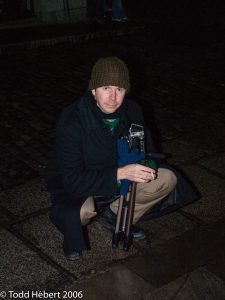 Tim and I took a trip to the Temple Bar section of Dublin and we spent some time taking photos and walking around nearby. We took photos along the Liffey, and spent some time listening to a trad session in the Ha’penny Inn, right by the South end of the Ha’penny Bridge. 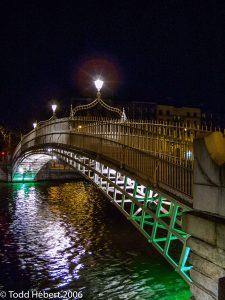 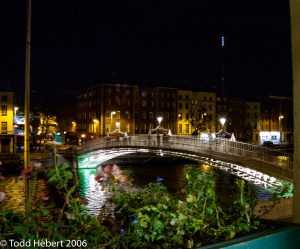 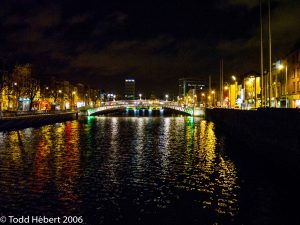 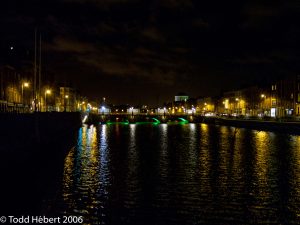 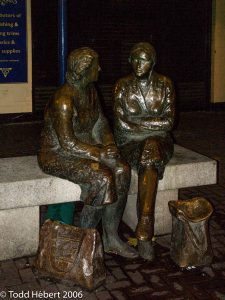 Two Women or The Hags with the Bags

Bombardiering, or just driving around randomly to see where we end up, is something my friends and I have always done.  We jumped in the car and drove up towards Drogheda to stop for dinner. 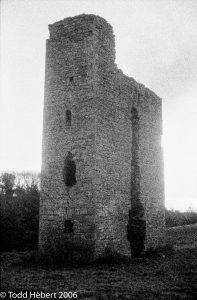 Horses in the Tower Paddock

We came across a paddock with a couple of horses and a nice tower ruin.  The horses were friendly and seemed to enjoy the attention of being fed grass by hand.  They were perfectly able to reach the grass to eat it, so I think the social aspect of having it handed to them was something they enjoyed. None of the photos I took of the horses came out.  It was getting pretty dark, and they were dark horses standing in the shadow of the tower. 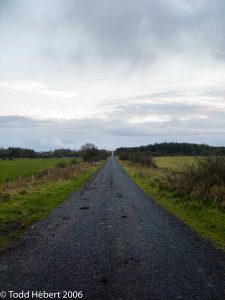 Another bombardiering trip was out towards the midlands.  We took the N7 out of Dublin and randomly chose a place to turn. This was a very nice and extremely long, straight, country road. I haven’t seen many roads in Ireland that are that straight for that long. 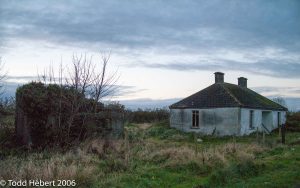 Flop House in the Middle of Nowhere

On this road we found a dilapidated house with a barn ruin.  The house had obviously been used recently. 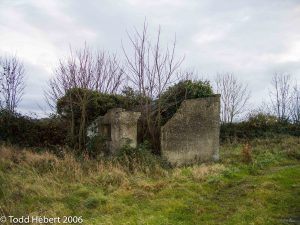 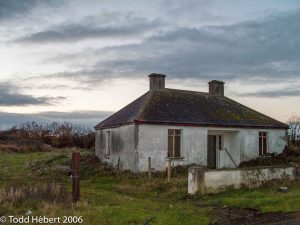 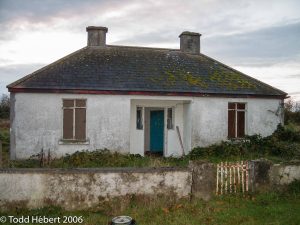 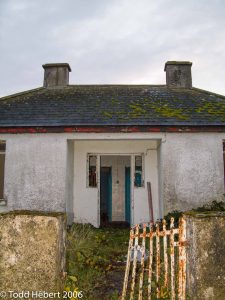 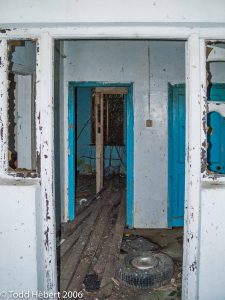 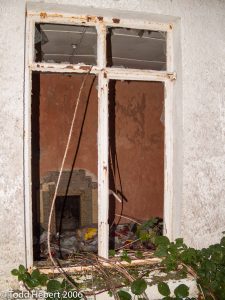 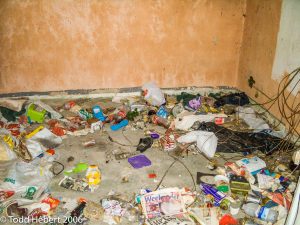 It appeared that people might have come to the house to drink and party, although there was some evidence of “sustenance” type foods as well as party supplies. The number of alcohol bottles seemed low for a place where teens were partying. 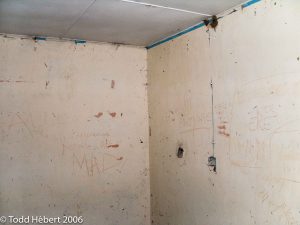 Graffiti on the Walls 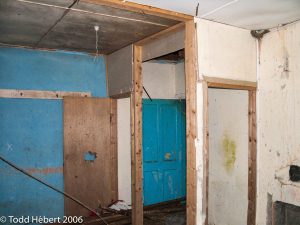 There was evidence that someone had relatively recently begun efforts to restore the house, but even the newly installed pieces appeared to be damaged or vandalised. 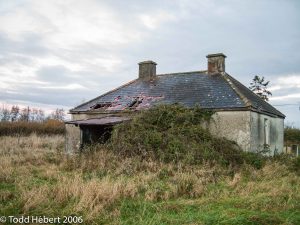 Notice the bird’s nest in the corner by the ceiling.

The state of the house did not improve if you went around to the back of the building.

Sunset in the Midlands 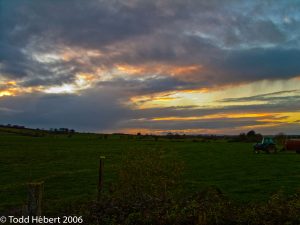 The sun went down while we were investigating the flop house, and I was able to get a nice sunset shot. 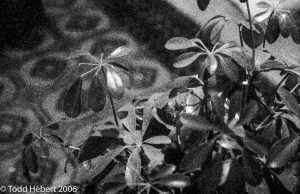 There were not many good shots in the black & white that I took.  Fast film is no substitute for long exposures on a stable tripod. Most of the shots were too grainy to use without downsampling them significantly.  Here are a few that I liked. 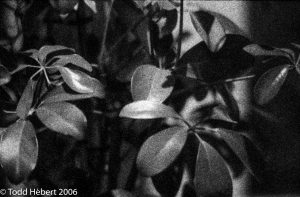